It’s mid-November and I expected to find Burnham Orchard’s apple trees bare when my husband and I went over the weekend. But the fruit is still hanging on the branches and employees are still busily adding bushels upon bushels of apples into massive cold storage units.
“We’ve had one of the best years for apples in a long time,” says Josh Raboin, co-founder of Redhead Ciderhouse, which he operates with Joe Burnham IV, the sixth generation to grow apples and other fruits at the orchards. “We have the tractors running until 10 or 11 at night and we’ve had to take a lot of bins offsite for storage because we’ve run out of room.”
We like them apples, but we’re most excited about sampling some of their hard ciders on tap at the Burnham Orchard market, already a go-to destination for produce and locally made food products. Being allergic to hops in most beers, my husband, Chris, has enthusiastically embraced the rise of hard cider — the fastest-growing segment of the beer and malt beverage industry. In fact, he was instrumental in the research (read = heavy drinking) that went into the Edible Cleveland story “Cider the Hard Way” in the Fall 2015 issue. However, Redhead Ciderhouse didn’t make it onto our radar until Rock the Core Cider Festival this past September.
“If I could have voted on a favorite hard cider at the festival,” my husband gushed to Raboin. “It would have been yours.” 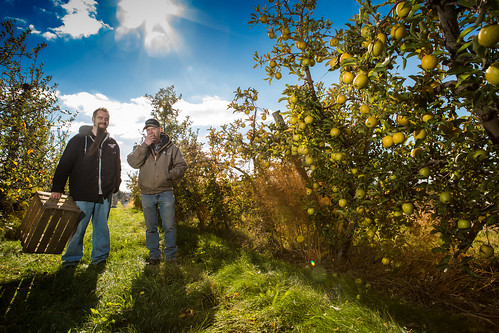 Redhead Cider stands out because it is the only in-house operation in the state. While Burnham has supplied fresh-pressed apple juice to hard cider producers over the years, it took some convincing from Raboin — not to mention his own sister who works for a wine distributor in Columbus —before he was ready to take on a new segment of the business himself. Raboin made it easy. Over the years, he’d been experimenting with his family’s hard cider recipe, which always started with Burnham’s apple juice, a blend of seven apple varieties — that his father would bring home after a day working at the orchard.
“Josh has the vision and I have the apples,” Burnham says about the partnership behind the hard cider business, which launched last year.
Besides Redhead Original Hard Cider, Raboin has had success experimenting with different ingredients. Jalapaños add a kick to Hot Chick; Cascade hops are used in Smooth Hoperator; and dill adds a refreshing taste to Coop Dill’ville. My favorite, though, is the cinnamon-infused Apple Pie, which tastes just like the dessert. 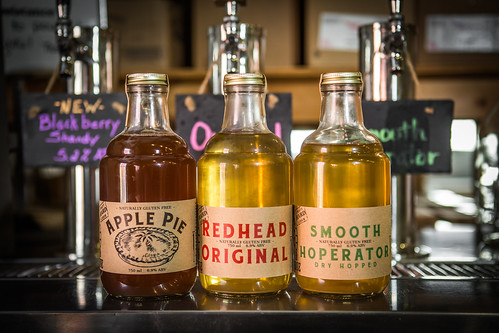 “We can’t keep the stuff in stock,” says Raboin. As he lifts the lid off a kettle of fresh batch, the cinnamon smell wafts in the air. “It smells like Christmas threw up in here,” he comments.
The new batch of Apple Pie should be ready to sell in the next few weeks. It helps that Redhead Cider is made using a proprietary method that speeds up the fermenting process. “It usually takes 30 days to a year between process and again,” Raboin says. “We ferment in five days and are packaging within two weeks.”
If you’re interested in trying some for yourself, be sure to check the Redhead Ciderhouse Facebook page  for availability. On the other hand, there’s always something taste at the orchard, including limited small-batch hard ciders. 8019 SR 113 E; Berlin Heights, OH; 419-357-2924, RedheadCiderhouse.com